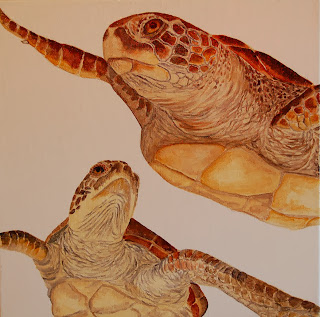 This painting has a lot going on even though ti is only 12 x 12!
Honoring the Elder shows two turtles, one larger and older above the younger one below.  Turtles not only honor each other, they just stay out of the way! They have been known to bite one another if there is food involved!
Honoring the Elder 12 x 12 Acrylic on deep edge canvas day 86 of the 100 Days~100 Paintings
Only 14 more days till set up for National Shrimp Festival in Gulf Shores , Alabama!
Posted by Loran Chavez at 4:20 PM No comments: 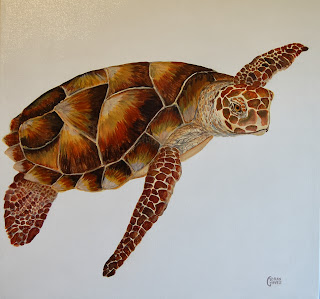 Peaceful is a 20 x 20 canvas painting of a turtle. This year was my first as a share the beach volunteer. I walked the beach early in the morning right as the sun was rising to scout for turtle nests. or evidence of them. I never found one this year but there's always next year! The one thing I did get to do this year was witness a turtle "boil". It is an amazing thing to watch, once these little guys decide to hatch there lots of noises in the nest, waterfalls is what they are called. Then they appear at the top scrambling for the sea. That is if there are no lights on the beach! They follow the lights from the condos or the moonlight streaming into the trenches built just for them. The first time I witnessed a boil, there was a full moon and they kept trying to go back up the beach. I was on my belly turning them around over and over until finally we put a towel over the trench and they went to the water. Those that were too exhausted to walk any more got a ride in the "turtle taxi" a bucket that transports them to the edge of the ocean. Their lives are hard with an average of only one turtle making it to adulthood from each nest. Most nests average about 100 eggs!
This painting marks day 85 of the 100 days~100 Paintings

Posted by Loran Chavez at 4:13 PM No comments:

Here's looking at you kid!

I always wondered what that turtle was thinking as it built it's nest on top of me while staying on the beach in the Philippines.
Let me back up, and tell the story..................................
My parents would night dive while we were in the Philippines. As least my father would, my mother was too scared of the sharks! She said she wanted to see them coming so she did not dive after dark. This night my dad was out looking while with his buddies for lobsters at night. Mom told me to go to bed. Bed on the beach was a parachute tucked into the cliff, pulled out and sand thrown on the opposite edge. It really was fun to sleep under the billowing orange fabric. That night, as with every night, the villagers had a burning barrel with a huge fire blazing out from it The Tent was located a little ways down the beach, but the fire was still quite visable so I turned my back to the water and fire while trying to go to sleep. I felt sand thrown on me, but just complained about the person coming in the tent being rude. I felt sand again and still not turning over, said would you please stop! When it happened yet again, I turned to tell the person to cut it out and realized there was a full grown mama turtle in the tent with me throwing sand while she was building her nest. She was in a trance, but I was not, running as fast as my 7 year old legs could carry me to my mother, all the time yelling about the turtle in the tent. She did not believe me and followed me to tuck me in for the night. Boy was she surprised!

Here's looking at you kid! 4 x 12 acrylic on canvas
Posted by Loran Chavez at 4:02 PM No comments: 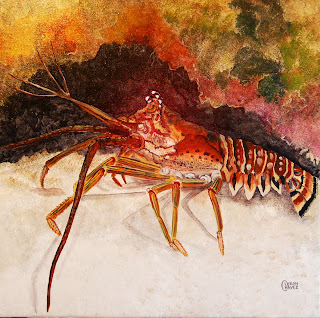 I became hooked on Lobster while living in the Philippines. When my parents went diving, it was a treat to see them come up with one of these guys in their clutches. I regarded it like steak back then. I still love the flavor of a properly cooked lobster, dipped in lemon butter and served with a baked potato and salad! The ones they would catch were big enough that I could make a meal out of the claws. One of my fondest memories of my mother was when she would et Lobster or crab, using her fingernails to pull the meat from the shell!
Called ,"Taking his chances" this lobster has come out from under the ledge and is taking his life in his claws. They hide under the shelf, waiting for an unsuspecting creature to come by unawares, and becoming his dinner! But while out from under the shelf, he becomes exposed, and may himself become the catch of the day!
The Florida Keys are where to go for lobster near here. While we were down there, we saw numerous traps ready for the season that was to come. We saw a couple of them while we were skin diving at John Pennencamp. It is the largest reef in the United States, located in one of the first islands in the chain called the keys.
"Taking his Chances" Loster 20 x 20 acrylic on canvas
Posted by Loran Chavez at 3:48 PM No comments: 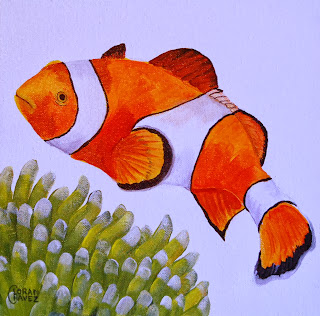 One of my memories from the Philippines was the clown fish swimming in the reefs. They were able to hang out with their 'hosts' the sea anenome without being stung! I always thought that was so cool. We had one of these guys in our saltwater tank that was on the counter at the house. I do not remember what happened to the tank, but I am sure one of dads friends was happy to take it off his hands when we had to leave.
Clownin' around 12 x 12 acrylic on deep edge canvas day 82 of the 100 days 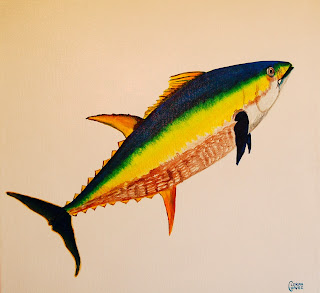 One of my bucket list things to do is go deep sea fishing. I want to catch and release whatever the deep sea brings. I also want to photograph the other people fishing as well as their "catches". I am a firm believer in eating what I catch or when I was younger managed to shoot when hunting. Otherwise I love the thought of releasing these beautiful big game fish. A few years back I was asked to paint a cover for the Mobile Big Game Fishing Book. I had a great time executing, painting and seeing the piece to it's completion and eventual sale. I would also love doing another cover as the one I did was so much fun to paint!
Ready to Eat is 20 x 20 Acrylic on canvas. Day 81 of the 100 Days~100 Paintings
Posted by Loran Chavez at 3:29 PM No comments: 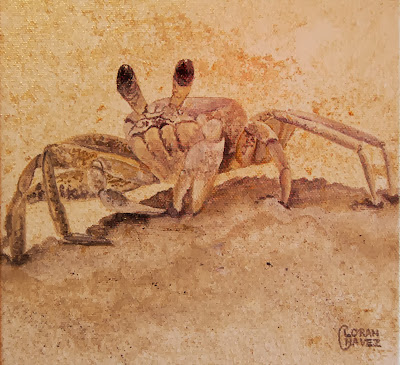 I want to call them Ghost crabs, my husband calls them sand crabs. They are fun to watch when they are bickering about their little territories. Shoving lots of sand and fighting with their claws! It is east=y to find them at night, during the day thay are very cagey about coming out of their holes. This little guy was so confused after he came out, running himself to exhaustion under an umbrella on the beach. Catching his breath and then running to find a hole in the sand. I only hope he did not run into another crab below!
Simply Sandy Acrylic on canvas 8 x 8 deep edge. day 80 of the 100 Days
Posted by Loran Chavez at 3:16 PM No comments:

Blue Men and their Lady

Dreaming of far off lands

Those of you that read the blog, know that I spent a couple of years in the Philippines. Recently, I had memories of the islands come back andvisit my dreams. The Islands are where I swam in warm blue waters, had a sea turtle build a nest on top of me, and learned the fine art of skin diving while playing in my parents bubbles from their scuba tanks.
I became very concerned about the local children having no clothes, so when I outgrew mine, I took them to the village near Subic Bay. Tony was our Bonka Boat captain and I played with the children while they swam in the sea. The other children swam in the buff, while I did not go any further than my underwear! We all became brown little nuts roasting in the abundant sunshine. My memory of the clothes is seeing the paper bag they were in torn to shreds and the cowboy boots within causing a huge fight among the children. Two seperate kids grabbed the boots, claiming them as their own and the battle was on. The villagers settled the matter by determining which child could fit in the boots. The shoes were then passed on to several children as they grew into them. I imagine the boots lasted long after I was gone, until they fell completely to pieces. I am certain the pieces were then used to make something else useful.
Palms 1, 2 & 3 as well as the path to the village are all memory paintings they measure 3 x 9
These are days 72, 74, 75, and 76 of the 100 days~100 Paintings.
Sorry for the disjointed posting, I cannot figure out what is going on with the set up!

Posted by Loran Chavez at 3:03 PM No comments:

Labels: Acrylic, foliage, Original paintings, palms, peaceful, Phillipines, sepia, sepias, small originals
Don't you wish you knew what they were thinking? Crabs are so interesting to me, with all their parts and pieces. These paintings are small, 4 x 12 They are days 70, 71, & 72 of the 100 Days~100 Paintings.
﻿﻿﻿

Posted by Loran Chavez at 2:37 PM No comments:


My mother once asked me, Don't you get tired of painting crabs? Never I replied!

Posted by Loran Chavez at 2:19 PM No comments:


Located at Celebration church in Fairhope, Alabama, this mural was a labor of Love. It took two weeks total, but only about 40 hours. Without the help of some really great people from the church, I would have been much longer! I am grateful to share my talents with

this  place we call our church home and I am
grateful for the talents God has seen fit to
bestow upon me. The top piece is the main
wall as you walk into the room. The flora are
under the window. The different monkeys
and birds were a delight to paint.
There is much more in the room to look
at and explore, but you have to
come to Fairhope to see it!

Posted by Loran Chavez at 2:01 PM No comments: